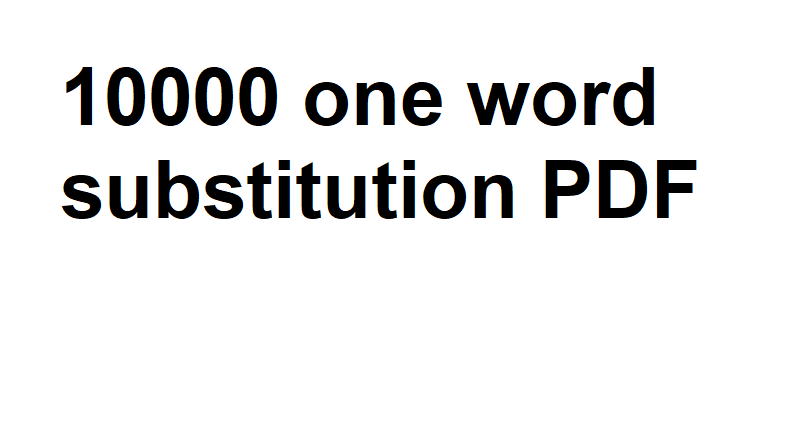 As you all know, every year SSC CGL, SSC CPO, CHSL MTS exam is conducted by SCC. In all these exams, men of subjects like English are very high and very important.

One word submission, etc. is very important in English subject asked by SSC in SSC exam, through today’s school, you are providing 10000 one word substitution pdf to all of you.

1. Something that cannot be heard – Inaudible
2. A song sung at a burial – Dirge
3. A period of ten years – Decade
4. One who leaves his own country to settle in another – Emigrant
5. A place where clothes are kept – Wardrobe
6. A person very reserved in speech – Reticent
7. Morals that govern one’s behavior – Ethics
8. Open refusal to obey orders – Defiance
9. One who loads and unloads ships – Stevedore
10. A sudden rush of a large number of frightened people or animals. – Stampede
11. One who is preoccupied with his own interests – Egoist
12. A geometrical figure with eight sides – Octagon
13. One who loves his country – Patriot
14. Incapable of paying debts – Insolvent
15. A long and aggressive speech – Harangue
16. The school or college in which one has been educated – Alma Mater
17. Enclosed area where aircraft are kept and repaired – Hangar
18. A short story with a moral, usually with animals as characters. – Fable
19. Having two opposing feelings at the same time – Ambivalent
20. A group of ships – Fleet
21. Pertaining to an individual from birth – Congenital
22. To increase the speed – Accelerate
23. A person who attracts attention with a flashy style – Flamboyant
24. A person who preaches religion and is considered to be a messenger of God. –Prophet
25. A game in which neither party wins – Draw
26. That which cannot be satisfied – Insatiable
27. A place where plants are grown for sale – Nursery
28. Putting to death painlessly to end suffering – Euthanasia
29. To rise in value – Appreciate
30. To brighten up with lights – Illuminate
31. Central character in a story or play – Protagonist
32. Person or animal living on another – Parasite
33. Having something more than required – Surplus
34. Anger about an unfair situation or about someone’s unfair behavior –Indignation
35. A building where grain is kept or stored – Granary
36. Working very hard and very carefully – Diligent

Abattoir – Place where animals are killed for food.
Abbot – A man who is the head of a monastery or an abbey.
Abbreviation – A shortened form of a word or phrase.
Abdication – To formally give up.
Ablution – Ritual washing of the body.
Abstruse -Hard to understand.
Abundance -A quantity that is more than enough.
Accentuate Give more force or importance to.
Accomplice – Helper in a wrong deed or crime.
Acronym – Word formed from initial letters of a name.
Addendum – Thing to be added at the end of a book, etc.
Advertisement – A public notice offering or asking for goods, services, etc.
Afforestation – The act of forestation by planting many trees.
Agenda – Items of business for consideration at a meeting.
Aggressor – Someone who attacks first.
Agnosticism -Doubtful about the existence of God.
Alien-One who belongs to different country, race of group.
Alimony- Allowance fixed after divorce to a wife.
Allegory – Story in which ideas are symbolized as people.
Alliteration – Commencement of adjacent words with the same letter.

Altruist –One who lives and works for the welfare of others.

Amateur – Lacking professional skill or expertise.
Ambassador – A diplomatic representative of one country in another.
Ambidextrous – Equally skillful with each hand.
Ambiguous – Having more than one possible meaning
Amnesia – Partial or total loss of memory.
Amnesty – A general pardon of political offenders.
Amphibian – Animals which live both on land and in water.
Amphitheater – A designated section of seats in any part of a theater.
Analgesia – The loss of ability to feel pain while still conscious.
Anarchist – One who wishes to destroy all established government’s law and order.
Anarchy – The absence of government in a country.
Anecdote- Short amusing story about some real person or event.

Anniversary – Yearly return of the date of an event.
Annual- That which happens once in a year.
Anomaly – Deviation or departure from common rule or standard or what is normal.
Anonymous – A book or a work of art whose author is not known.
Antagonist – One that opposes other.
Antidote – A medicine to cure the effect of poison.
Aphasia – Loss of ability to understand speech.
Apostate – One who abandons his religious faith.
Aquatic – Animals which live in water.
Arbitrator/ Arbiter – Someone chosen to judge and decide a disputed issue.
Aristocracy – A government by the nobles.
Armistice – The cessation of warfare before a treaty is signed.
Ascetic- One who practices self denial as a spiritual discipline.